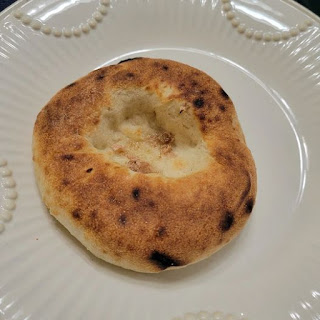 A bialy is not a bagel. Bialys have a bottom and are baked, not boiled then baked, like the better-known bagel.

Enough with the alliteration, but it was unavoidable!

Bialystok is now in the far northeast of Poland, had a large Jewish population, and was switched around between neighboring countries over the years. When I first read Russian short stories, I would come across something like "'What would you like for breakfast,  IvanAlexanderovich?'" "How about a hot roll with onions?'"

I would scratch my head and read on,. Years later, I found them in Wegman's, a fantastic place to buy groceries, eat, and drop off your dry cleaning. They had some with peppers and even some pizza filling if I remember correctly.

One last memory: when I served a bilingual English-German parish, someone from the German side actually came from Bialystok. His name was Leonid Schulz, but he went by Leo. During the war, he served on the ground with the Luftwaffe and was taken prisoner in Norway. 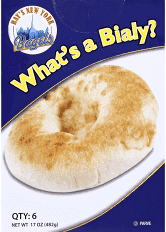 Here is the brand I found at Publix in Red Bank (near Lexington), South Carolina.

Have a good nosh!